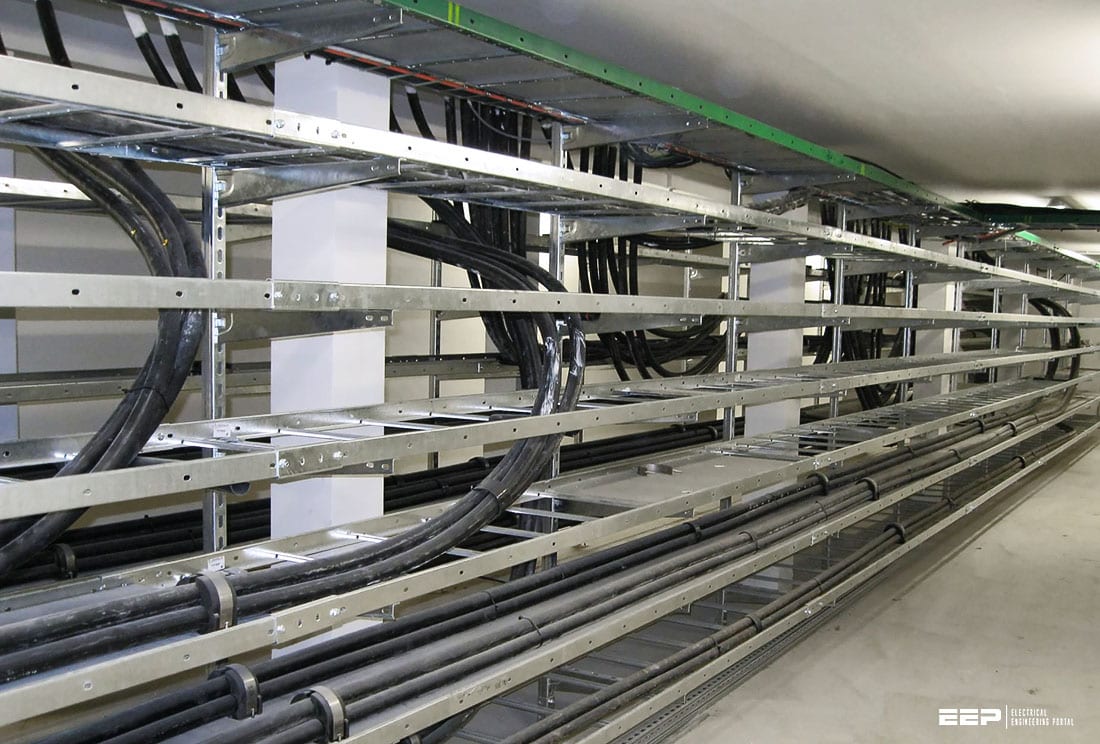 
Energy transport via cables and busbars

First, to be clear, there are dozen of concerns and precautions you should be aware of when we talk about energy transport. Cables and busbar systems are the most common and reliable ways to do so, at least until wireless energy transport is developed 🙂 However, many potential issues need to be addressed. This article deals with four significant precautions you should take – grouping conductors in parallel, short circuits, magnetic effects, operating current, and voltage drop.

If you ask me, I will always prefer the prefabricated busbar trunking systems over cables, where possible, of course. There is no rule for such a statement, but if you can choose and have the financial support – go for prefabricated busbars. Pay more for reliable power transport and less headache.

Ok, let’s address these three critical precautions for the installation of cables and busbar trunking systems.

Above a certain current (usually several hundred amperes), the use of several conductors in parallel allows their cross-section to be limited and thus their handling made easier. This technique, very often used for the conductors between the transformer and the main low voltage switchboard, is also used for high-power outgoing connections.

The use of prefabricated busbar systems is, however, recommended.

The arrangement of conductors in a triangle (or in a trefoil) provides the best balance, but is generally limited to two or even three conductors per phase. Above this, the overlapping of layers limits cooling and installation in a bundle is preferable.

3-phase distribution via the conductors in parallel must comply with the strict geometrical layout rules. This also supposes that all the conductors are of the same type, same cross-section and same length and that they do not include any tap-off in their route and cannot be supplied individually.

Above four cables, it is preferable to use prefabricated busbar systems, providing a better distribution of currents.

1.1 The theory behind rules

With alternating current, electrical conductors have an impedance (expressed in Ohms) which is the complex function of three factors:

It is considered that beyond 240 mm², the contribution made by reactance lω becomes the dominant factor in the impedance. The conductor therefore behaves like a receiver, shifting the current and the voltage.

The illustration opposite is given for a phase shift of 45° (cosϕ = 0.5). Resistance and reactance equal. It should be noted that, for these currents, the capacitance component can be ignored.

Self-induction or own inductance coefficient (L)

It determines the electromotive force “e” circulating in a conductor following the variation in magnetic flux (Φ) surrounding the conductor. The conductor’s inductance depends on the material’s magnetic characteristics, the medium and its geometry (length, number of turns):

For a symmetrical link, the self-induction coefficient is perceptibly identical for each conductor, this is:

In an asymmetrical arrangement, since the distances are different, the mutual inductances between conductors will also be different. From this, it follows that the distribution of the current will be asymmetrical.

Application to conductors in parallel

The equal distribution of currents in several identical conductors in parallel is uniquely linked to the equality of the impedances in each of the conductors. With the inductance proportion becoming dominant with the increase in section, the geometrical layout of the conductors will dominate (identical distances for each of them).

In a cable or bundle of conductors in 3-phase (with or without neutral), the vectoral sum of the currents is nil and the resulting magnetic induction created by the conductors remains very low if they are grouped together and arranged in a regular pattern. If this is not the case, the self-induction coefficient of the conductors will be modified by the interaction of the magnetic field created.

Own and mutual inductances and the distribution of the currents will then be out of balance.

There are two destructive effects which can affect conductors in the event of a short circuit:

When a short circuit between two active conductors occurs (the most probable), the conductors suffering the intense current of the short circuit will be repelled with a force proportional to the square of the intensity. If they are poorly secured, they will start to whip and could tear out of their ties and touch another conductor or an earth causing a new short circuit with a highly destructive arcing effect.

Multi-conductor cables are designed to withstand the forces that could be exerted by these conductors.

It is the use of single conductor cables that requires particular precautions.

The indications given below, intended to draw attention to the importance of holding conductors securely, cannot by themselves guarantee that short circuit conditions will be withstood. These will require test simulation.

Even if there are few limitations in the use of prefabricated busbar trunking, it is still important to check that its short circuit resistance characteristics are actually coordinated with its upstream protection devices.

The trunking must be able to withstand the thermal stress associated with the short circuit for the entire duration of the fault, i.e. for the whole of the time necessary for the protection device (circuit breaker) to trip. Similarly, the electrodynamic forces permitted by the busbar trunking must be compatible with the peak current limited by the upstream protection.

The presumed peak value (Ipk), can be determined by reading devices’ limiting curves or in the absence of data, by applying an asymmetry factor n (see Table 2 below) at the effective value of the short circuit current (Isc).

As with trunking made up of conductors and cables, presumed short circuit current calculations and the determination of protection devices must be done prior to any installation.

Why I prefer busbar trunking systems more than cables

3. Precautions with respect to magnetic effects

Passing high currents through conductors induces magnetic effects in adjacent metallic masses, which can result in the unacceptable heating of the materials.

In order to minimise the induction created in magnetic loops, it is still recommended that all the life conductors in a circuit (phases and neutral) should be positioned within the same metal (steel) compartments.

Since the vectorial sum of the currents is nil, the one of the fields created is too.

The circulation of a current I in a conductor creates a proportional field H , the effect of which is to create induction B in the surrounding medium. The value of B depends on the value of the field (therefore on the current) but also on the magnetic characteristics of the medium or the material. It is the magnetic permeability µ expressed in henries per metre (H/m).

The more the permeability of the material increases, the more the field lines are concentrated and the higher the induction. Above a certain value there is saturation and heating.

Ferrous materials (steel) being magnetic by nature, are particularly likely to conduct fields but also to become saturated if these fields are too high.

To calculate the actual current that will allow the choice of the busbar trunking, a certain number of data must be known:

For a 3-phase supply, the actual operating current is determined by the formula:

Losses through the Joule effect are essentially due to the electrical resistance of the bars. lost energy is transformed into heat and contributes to the heating of the trunking.

For a precise calculation, the losses through the Joule effect must be calculated for each section between tap-offs by taking into account the actual current circulating in it.

To simplify the calculations, every manufacturer indicates in the tables the characteristics and unit voltage drop K, according to the values of cos ϕ. The voltage drop at the end of the trunking can then be calculated using the following formula:

The use of cable tray systems for power distribution requires detailed knowledge of electrical installation characteristics. For installations with long runs, it is particularly important to check voltage drops.

When the main cables in the installation are longer than 100 m, the permissible limit values can be increased by 0.005 % per metre above 100 m, without this addition itself exceeding 0.5%. The value of the unit voltage drop v (in volts per ampere and for 100m), can be read directly in the manufacturer’s tables.

If the installation supplies motors, it is advisable to check the voltage drop under start-up conditions. To do this, simply replace current IB in the formula opposite with the starting current of the motor and use the power factor on starting. in the absence of more accurate data, the starting current can be taken as being 6 × In.

The voltage drop, taking into account all the motors that may start at the same time, must not exceed 15%. apart from the fact that too high a voltage drop can hinder other users of the installation, it may also prevent the motor starting.

Further calculations in the form of MS Excel spreadsheet: