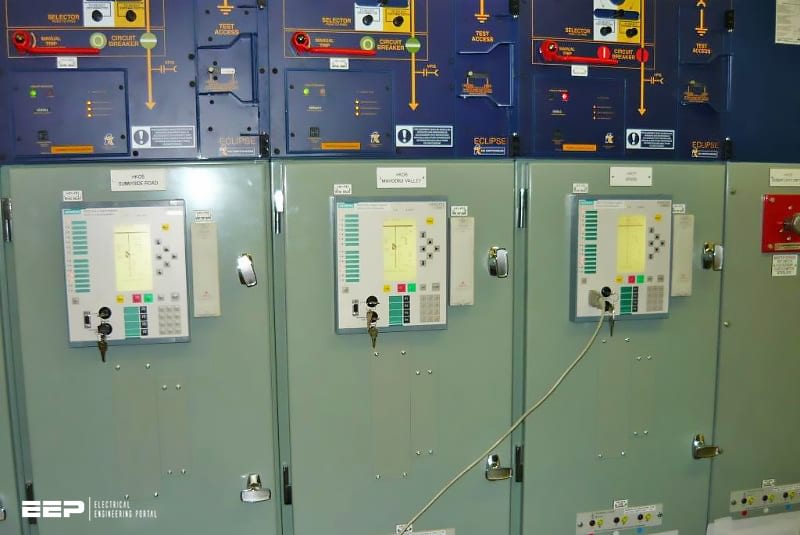 The mode of operation of an MV industrial power system that is galvanically isolated from the public power supply is determined by the method of neutral earthing on the secondary side of the transfer transformer.

The following methods of neutral earthing can be used to earth secondary-side neutral points of transfer transformers:

Solid neutral earthing, which is not mentioned, is not particulary important in MV industrial power systems due to of the high line-to-earth short-circuit currents and the resulting interference (EMC), earthing (permissible touch voltage) and dimensioning problems (required rated short-time withstand current of the cable screen).

A power sytem with isolated neutral (Figure 1) is defined as a power system in which the neutral points of transformers and generators are either not connected to earth or only connected to earth through measurement and protective devices with a very high impedance or through an overvoltage protector.

Operation with isolated neutral is the simplest form of earth-fault-oriented neutral-point connection. In the event of an earth fault, voltage displacement to earth occurs.

This voltage displacement which is shown in Figure 2 as a vector diagram, is characterized by the fact that the neutral point of the system (transformer neutral point) accepts the full star voltage to earth and the lines without faults increase their voltages to earth from the star voltage to the delta voltage.

The line-to-line voltages of the earth-faulted power system, on the other hand, do not change. Because of this, no reaction arises that is disadvantageous for the loads connected to the power system and operation can be maintained even in the event of an earth fault.

However, the voltage displacement to earth causes the capacitive earth-fault current ICE of the entire power system to flow through the earth fault location. This earth-fault current, which is largely determined by the earth capacitance of the lines CE, has the magnitude ICE ≈ 3 × ω × CE × ULE.

For reliable operation of industrial cable networks with isolated neutral, a fault current range of 10 A < ICE ≤ 30 A is recommended. In this range, it can be expected that both the risk of intermittent earth faults with high transient overvoltages and the thermal effect of the earth-fault arc are relatively minor.

Due to the comparatively low thermal stress at ICE < 30 A, the earth-fault arc can burn for longer without destroying the insulation of the intact conductors. Destruction of this insulation would entail a serious danger of the earth fault developing into a double earth fault or short circuit.

Danger of fault propagation and the risk of a double earth fault can only be prevented with small earth-fault currents if the earth fault is detected selectively and operation is continued only for a limited time. Generally, a time limitation of 3 h for continued operation should be sufficient to create the necessary conditions for earth-fault clearance without any adverse effect on the production process.

By means of the measurement with reference to the neutral-point displacement voltage Uen of this capacitive residual current (sinφ measurement), the SIPROTEC relay detects the feeder with the earth fault.

The relaxation oscillations, which mainly occur when an earth fault arc is extinguished or on an energizing operation, put the iron core in the saturated state and cause high core losses.

As a consequence of these high core losses, the voltage transformer can be thermally overloaded and finally destroyed.

Table 1 contains standard values for damping resistors that have proven convenient in practice.

The choice of RD is based on the thermal limiting output (rated long-duration current) of the e-n or da-dn winding of the voltage transformer. If these standard values cannot be used, other values can be calculated.

The calculation must be performed as follows (Equations 1, 2, 3 and 4):

Example of calculation of the damping resistor dimensioning according to above formulas (RD-req and PV-req): see Table 2 below.

A further negative phenomenon in isolated-neutral systems are overvoltage levels that result in an excessive voltage stress on the equipment insulation.

This transient overvoltage is brought under control by the insulation level that is standardized and assigned to the specific rated voltage of the item of equipment (Table 3).

Handling of long-lasting power-frequency overvoltages by the equipment rated voltage of the cable network (e.g. Um = 24 kV at UnN = 20 kV) is ensured if the individual earth fault does not exist for longer than 8 h and the sum of all earth-fault times over a year does not exceed about 125 h.

Compliance with these time limits must be ensured in the operation of cable networks with isolated neutral.

Despite its negative side-effects (ferroresonance, high transient and long-lasting power-frequency overvoltages), operation with isolated neutral is very important for industrial power supplies. This method of neutral earthing is preferred in small cable networks and those without (n–1) redundancy.